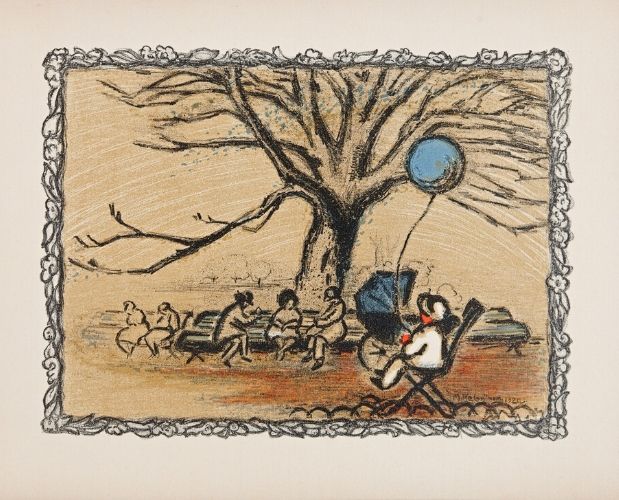 The Finnish painter and graphic artist Martta Helminen studied at the Artists’ Society of Tampere (1906-1909), and from 1910 to 1921 was art teacher at the Girls’ High School of her hometown. At the same time, she pursued her artistic apprenticeship in Munich (1910), Paris (1914 and 1921) in the class of painter Charles Guérin at the Académie de la Grande Chaumière, and in Italy (1928). She moved to Helsinki in the late twenties, in the Meilahti district; she occupied a wooden villa overlooking the bay with her friend, the journalist and feminist activist Göta Sinervo (born Salovius). The two women contributed to the important Aamo magazine [Morning], Martta designing several covers. The artist painted many portraits, she is also credited with the altarpieces of the churches of Pihtiputaan (1925), Punkaharju (1927), Kangaslammi (1928) and Luumäki (1929), as well as murals (for the Tammela School of Tampere).

“Women artists appear to be completely absent from the accounts of Finnish art in the early 20th century. Notions of art described as modernism have been regarded as a male domain. In the early years of Finnish independence, it was also felt that women could not become artists with a message for the nation. Women artists were no longer awarded prizes as they had been at the end of the previous century, they received hardly any grants, and critics did not write about their work. Only a few Finnish women artists of the early 20th century emerged, such as Helene Schjerfbeck, Ellen Thesleff, Ester Helenius and Sigrid Schauman. The majority of art students, however, were women, many of them becoming professionals in the arts […]. The women artists of the early 20th century include many interesting and unique artists, such as Elga Sesemann, Helmi Kuusi, Sylvi Kunnas, Greta Hällfors-Sipilä, Ina Colliander, Edith Wiklund, Martta Helminen, Meri Genetz, Inni Siegberg, Eva Törnwall-Collin, Aino von Boehm and Gunvor Grönvik.  They would test the boundaries of art, break the boundaries of form, experiment with colour and brushwork, and break up or flatten the visual space” (Riitta Konttinen / Tampere Art Museum).

First and only edition.

Lovely collection of lithographs made by the important Finnish artist during her stay in Paris in the 1920s.

Number of copies not known, but very small.

← View Highlights Get in touch →
This site uses cookies. Find out more