The Poetic World of Edgard Tytgat 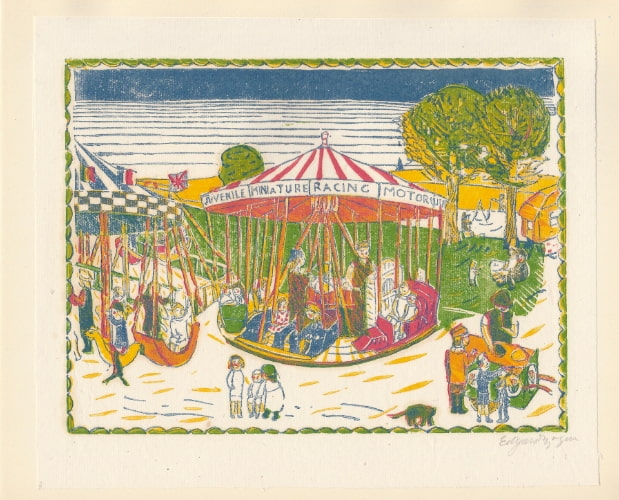 The Belgian artist began his career painting portraits, landscapes and interiors in an Impressionist style, sharing a studio with his friend the painter Rik Wouters (1882-1916). During the First World War he moved to London where he set up his own private press L’Imagier, working as a book illustrator and collaborating with Cyril Beaumont (1891-1976), the noted ballet historian, bookseller, printer and publisher, whose shop in Charing Cross Road was a meeting place for writers, artists, Ballets Russes dancers, and bibliophiles, like Adrienne Monnier’s shop in Paris. Cyril Beaumont recalls: “My desire for woodcuts was inspired by my association with the Belgian artist Edgard Tytgat, two of whose books, charmingly illustrated by woodcuts, I had recently published. Tytgat was a charming personality, an artist Peter Pan, who, although he must have been about 35, lived and revelled in a world of his own, peopled with happy children, acrobats, fairs and roundabouts. All his work, whether painted in oil or watercolour, or cut on wood, was distinguished by a naive, child-like simplicity of treatment. His drawings were in simple outline or mass, his colouring was bright and effective. He cut his blocks with the aid of a selection of small chisels and gouges. His printing inks were made from oilmen’s powder colours ground fine with oil on a glass slab” (The First Score, 1927, pp. 42-44). After the war he returned to Belgium and turned to painting subjects such as circus and carnival themes in a mildly Expressionistic consciously naive way. He pulled out all the visual stops to retell myths, legends and fairy tales in his paintings and prints. “Like the filmmakers of his time, he depicted a world full of imagination, absurdity and humour” (M Museum). During his career Tytgat painted nearly five hundred canvases and made countless watercolours, woodcuts, etchings and drawings. Even though he belonged to the group of artists associated with the journal Sélection, his work cannot be placed in any one particular camp. It is difficult to divide his work into well-defined periods, and it lacks clear chronological development. His earliest works are considered impressionistic, while later works can be described as expressionistic or naive.

Oblong 4to, in sheets as issued in publisher’s cream cloth-backed cream card portfolio with burgundy ties, large colour illustration on first side, colour vignette featuring a carrousel in centre of lower side. Engraved throughout on wood and linoleum. 3 unnumbered leaves of half-title (with justification on verso), title and table, 8pp. of text printed on recto only, 1 unnumbered leaf of colophon with Tytgat’s fine printer’s mark. Illustrations in the text and 6 mounted colour plates on Chine. First Edition, limited to 150 copies.

One of 40 deluxe copies with the text illustrations hand-coloured by the artist and each plate signed in pencil.

A very unique copy signed and marked “Exemplaire d’artiste” by Tytgat who has decorated the upper cover of the portfolio.